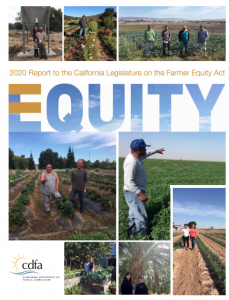 Last month, the California Department of Food and Agriculture (CDFA) released a much-anticipated report highlighting inequities in California agriculture and recommending steps the state agency can take to address historic and lasting racism. While the report identified some key areas for the agency to advance justice, farmers of color have raised concern about what it fails to acknowledge.

The report, a requirement of the Farmer Equity Act of 2017 (Aguiar-Curry), was championed by a group of farmers of color and allies called the California Farmer Justice Collaborative.

The report’s release came just days before Juneteenth, the celebration of the emancipation of slaves and on the heels of public protests around police brutality of Black people. America’s agricultural system was built upon slavery, and continued with serf-like sharecropping arrangments for black farmers even after “freedom” in 1862. Even as recently as 1999, federal courts ruled (Pigford v. Glickman) that the U.S. Department of Agriculture had discriminated against Black farmers through loans and disaster assistance. 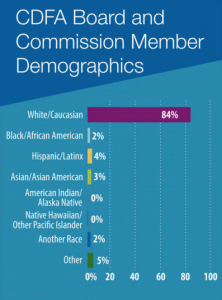 It’s no surprise then that farmers of color, including black farmers, today only own 2% of the farmland in America. Land access and tenure has shown up time and time again in CAFF’s work, including policy surveys of members and recent listening sessions for urban farmers. And in recent years, we’ve listened to our community’s growing calls for lifting up and integrating more deeply social justice into the larger “sustainable farming movement”.

This week, the California Farmer Justice Collaborative called out the shortcomings of the CDFA’s new report, requesting a more direct acknowledgment of historical context in a statement released this week:

“Unfortunately, the report does not include any of this critical historical context of discrimination and injustice in California agriculture. CDFA has existed since 1919; this year marks 100 years since the California legislature created the state’s single department tasked with protecting and promoting agriculture for our state. The Department’s website states “California’s agricultural abundance is a reflection of the people who made the Golden State their home… Early California farmers and ranchers were the Spanish missionaries, followed by Mexicans, Japanese, Chinese, and Russians. Today, nearly every nationality is represented in California agriculture.” As joyous as this token of diversity is, the Farmer Equity Act and Advisor are meant to play a role in acknowledging the history lost between these words: dispossession of Native lands, the broken promise to Black farmers, the Dust Bowl, the Bracero program, alien land laws, and Japanese internment, to name a few of the ways that California’s history has systematically worked against the elusive promise of farming for socially disadvantaged farmers and ranchers.”

The report finds that in order to make progress towards racial justice, the state of California needs to make investments in four main areas:

In addition, the report suggests more internal resources, collaboration & training for CDFA, such as training for staff through GARE, the Government Alliance on Race and Equity.

CFJC called out the “lack specificity or actionable and prioritized recommendations”, urging CDFA, legislators, and partners to do the following:

To share your thoughts on CDFA’s new report and CAFF’s work aiming to better address racial justice in California’s local food and farming system, please reach out at contact@caff.org